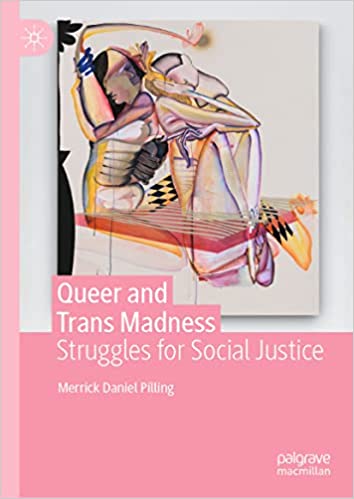 This book puts Mad Studies and activism in conversation with queer and trans activism and resistance. When I first came across what would eventually become known as Mad Studies, I did not see a lot of representation of racialized and queer and trans voices and experiences. I was surprised by this because of longstanding resistance to pathologization within these communities. At the same time, some of the ways that queer and trans people have resisted pathologization have reenforced sanism and ableism. Queer and Trans Madness shows the ways in which queer and trans people are pathologized and psychiatrized beyond the diagnoses that specifically target(ed) us (such as Homosexuality, Gender Identity Disorder, and Gender Dysphoria). I argue that we need Mad Studies to help us broaden the critique to address the biomedical model of mental illness as a whole, not just these specific diagnoses. I show how racial and colonial hierarchies and constructions of gender/sexual dissidence as perversion form the foundation of psychiatric knowledge and practice. I draw on two different studies in this book. The first is a study that I conducted in which I interviewed 37 LGBTQ people who experience distress, 15 of whom are BIPOC. The second is a study that I worked on where we reviewed 161 psychiatric inpatient charts. Dr. Andrea Daley was the Principal Investigator on the second study (for more information see https://link.springer.com/book/10.1007/978-3-030-83692-4).

Here is what I see as some of the contributions of Queer and Trans Madness. It documents ongoing psychiatric violence against 2SLGBTQ people and shows how psychiatric institutions are carceral in nature. More people are realizing that there are problems with calling the police on people who are in distress, but there is perhaps less awareness that the psychiatric system is also carceral. There is a chapter that focuses on inpatient psychiatric chart documentation on trans and non-binary people that illustrates psychiatric violence against trans and NB people and how transphobia and transmisogyny intersect with racism in the psychiatric system. The final chapter discusses the importance of non-carceral responses to distress, mutual aid, and collective care.

My hope is that Mad Studies continues to develop analyses of the ways sanism and ableism intersect with transphobia, homophobia, white supremacy, colonialism, and other mutually constitutive systems of oppression.

The book launch for Queer & Trans Madness: Struggles for Social Justice, will be held on Zoom on Sun Jun 12 at 3:00 EST.
More info about the launch: https://www.uwindsor.ca/wgst/StrugglesForSocialJustice
More info about the book: https://link.springer.com/book/10.1007/978-3-030-90413-5#about-book-content

Direct link to register for the event: https://tinyurl.com/3nzwbke4 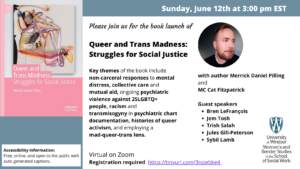